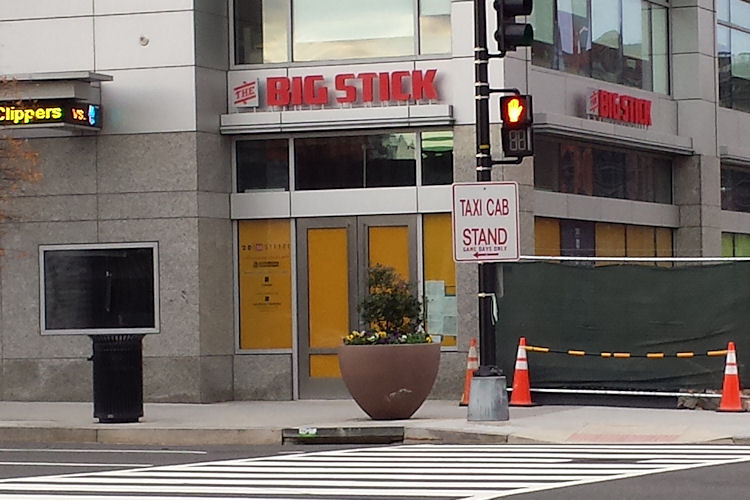 It's been a long time coming, but it appears that Justin Ross's second neighborhood venture, The Big Stick, is getting close to opening on the northwest corner of Half and M, in the 20 M office building.
The sign is now up (as captured by @CapCityChewy), and yesterday Eater DC had a peek at the designs for the space, saying that the restaurant "will aim to open in the first or second week of December" because Ross "wants things to be up and running smoothly before the Washington Capitals play the Winter Classic at the stadium January 1." Though, as always, let's all repeat the mantra that it will open when it opens.
As for the menu, Eater says that in addition to the sausage-based menu we already knew about, The Big Stick will "also offer some more hard-to-find dishes like raclette, the cheesy European dish," and that the beer menu will "emphasize European lagers and pilsners over hoppy American brews (though they'll still have some of those available)."
There's also some rough sketches of the interior design, which has hints of inspiration from ski lodges (tied in with the raclette, I guess), but "baseball also works its way into the design theme." It will be "bar-centric" as well, with plenty of TVs. So I guess there won't be 8,000 Teddy Roosevelts on the wall?
UPDATED 12/2 to add my own lousy photo of the signage.