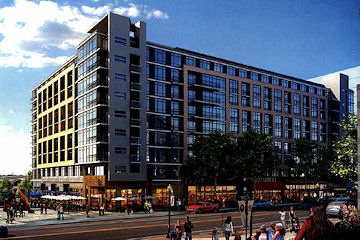 Given that the plan to redevelop the Florida Rock site along the Anacostia River just south of Nationals Park has been in the works for about 15 years now, it's worth giving a post to the news that yesterday a permit was issued to allow the initial excavation, shoring, and sheeting for the 350-unit apartment building that will be the first phase of the 1.1 million-square-foot mixed use project that's now known as RiverFront on the Anacostia.
There's been no announcement of construction financing (see update), or any sort of "Hey, we're starting!" missive, but snarky observers can no longer point to the lack of even an initial permit as a signal that the project might be about to get underway. The permit for the actual vertical construction of the building is still in process, however.
UPDATE: From GlobeSt., via a reader, showing that I was off by 24 hours: "MRP Realty and Florida Rock Properties have secured a $65 million construction loan provided by First Niagara's Commercial Real Estate Group for the development of a mixed-used residential building on the Anacostia Waterfront. Yvonne Ulrich, vice president of the Plymouth Meeting, PA-based lending group, managed the transaction for First Niagara."
This construction financing release also says that the apartment building will be called "The Riverfront." And a delivery date of Sept. 2016 is mentioned.
This building will go up at the far eastern end of the site, next to Diamond Teague Park, expanding the existing public plaza and offering some retail there as well. I wrote more about the design back in 2012, though admittedly the final zoning approvals for the project came during my hiatus and so I didn't watch too closely.
When will work start? All together now: We Shall See....