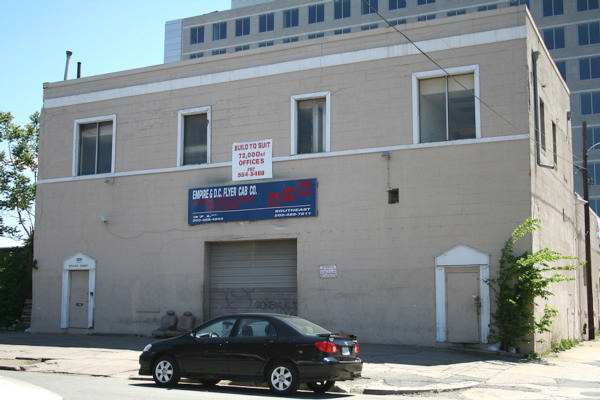 A raze permit has been approved, fences have gone up, and the two-story building at 37 L Street SE that has been home to the Empire and DC Flyer cab companies for a number of years is apparently in its final hours/days/weeks.
The site was purchased last year by DBT Development for $6.7 million, with plans for an eleven-story 74-unit building that apparently will be condos. DBT was also the developer of the condo building at 1350 Maryland Ave., NE.
I had hoped to get some renderings, but decided to stop waiting and get this post up, in case people wonder why fences are now in place.
It is a small site--less than 8,000 square feet--and does not include the WMATA Navy Yard Metro station "chiller" operations immediately to its east, on the corner of Half and L, though that site is also expected to be a residential building, by MRP Realty, if that project is still happening.

It will be interesting to see if it is demolished before October 24, which will be the 40th anniversary of the Cinema Follies fire, when a ground-floor explosion and the resulting flames blocked the exit from the 50-seat x-rated gay movie theater on the second floor, killing nine people with thick toxic smoke.