There's a lot going on over yonder at 11th Street these days, as the initial 11th Street Bridges project continues toward its expected completion next year while the now-funded Phase 2 work is starting to get underway.
I was able to arrange a tour last week (thank you, bridge folks!), and have put together a photo gallery of the most interesting shots.
However, there's a lot going on and so I'm going to break out some of the information here as well. (But go look at the gallery too!) 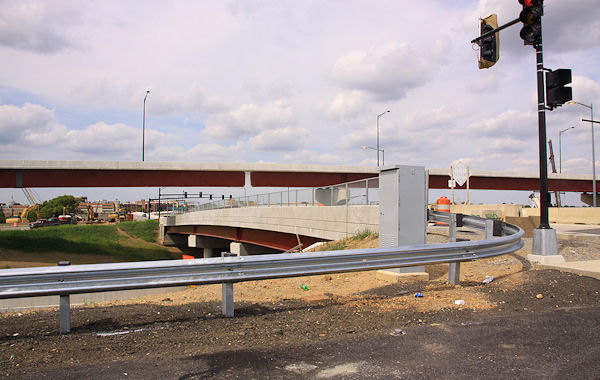 New Ramps from/to 11th Street Local Bridge
By the end of the month (or maybe even by the end of the week), two new ramps on the 11th Street Local Bridge will open, providing access to southbound I-295 from the local bridge and to the local bridge from northbound DC-295. There are signalized intersections at both ramps, with turns allowed in each direction. And, once construction is finished to make 11th Street two-way from O Street northward, commuters driving north on 295 will be able to use the new ramp to the local bridge to then arrive directly at the Navy Yard's entrance gate at 11th and N. 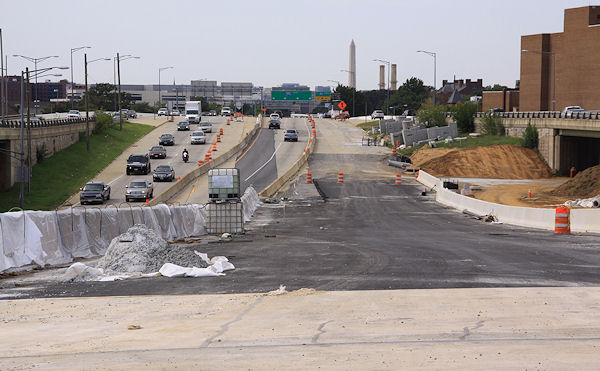 Southeast Blvd., and Outbound Freeway Traffic
This week saw the first of the lane closures that within a few months will signal the end of the SE Freeway east of 8th Street. Once all lanes are closed, traffic taking the old two-lane flyover to outbound I-695 will be temporarily routed onto the completed-but-not-opened inbound flyover connecting I-695 and I-395. This will allow for the razing of the old outbound flyover, and construction of a new three-lane flyover in the gap between the old and new ones. The filling of the old sunken freeway will also begin, for the new at-grade Southeast Blvd. 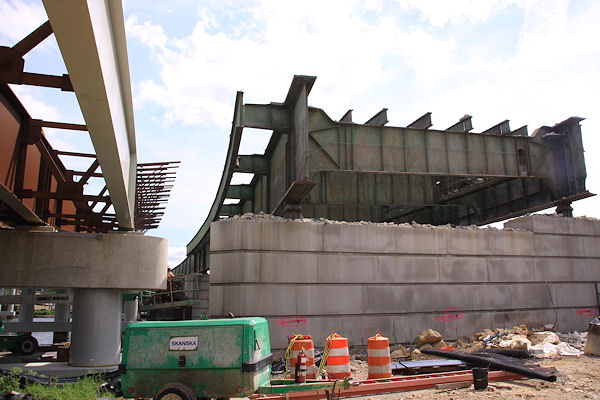 Old Outbound Bridge Demolition
The old outbound 11th Street Bridge is now little more than a bunch of old girders, which are starting to be removed. Soon, all that will be left will be the river piers, though two of those will be used to create viewing platforms that will be accessed via walkways from the new 11th Street Local pedestrian path. (And can be reused if anyone ever decides to pony up the millions needed to create the 11th Street Recreation Bridge.) In the meantime, work continues on the downriver edge of the new local bridge, to get it to its full four-lane-plus-ped-path width.
But there's more than just these items and photos. There's photos of the under-construction ramp that in about three months will take traffic from outbound I-695 to northbound DC-295, plus the big piles of dirt waiting to be used to fill in the eastern part of the Southeast Freeway, and the work on the ramp from 11th Street to westbound I-395, and more. So go look at the entire gallery. (I've also incorporated some of the new photos into my 11th Street Bridges project page, to go with the before-and-afters.) I also wrote in more detail about the Phase 2 projects a few months back. 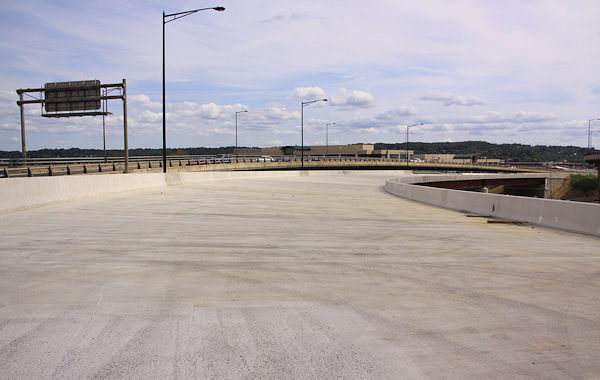 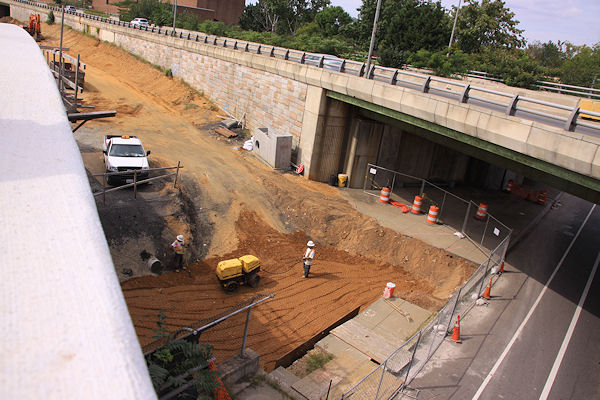