2 Blog Posts
Aug 7, 2008 4:00 PM
DC and Verizon Reach Deal on FIOS
From the Post's WashBizBlog: "The District and Verizon Communications have reached an agreement to bring the company's FiOS high-speed Internet service to the city. Eric Richardson, director of D.C. Office of Cable Television, said the agreement requires approval by the mayor's office and the D.C. Council, a process he said could be completed by the end of the year. Richardson said negotiations took nine months, less time than it has taken the District to work out previous cable franchise agreements." As posted a few weeks back, there's a fence sign in the 900 block of Half Street, SE proclaiming "1st Community in DC to Offer Verizon FIOS!", and 70/100 I have marketed themselves as pre-wired for FIOS, so perhaps Near Southeast will be at the front of the line when service does actually start. When would that be? "A spokesman for Verizon, Harry Mitchell, said his company looks forward to introducing the service soon. 'We are excited about this. Washington is a great market for us,' he said."
Aug 7, 2008 7:18 AM
City Launches New Anacostia Waterfront Projects Web Site -- 11th Street Bridges Replacement Info 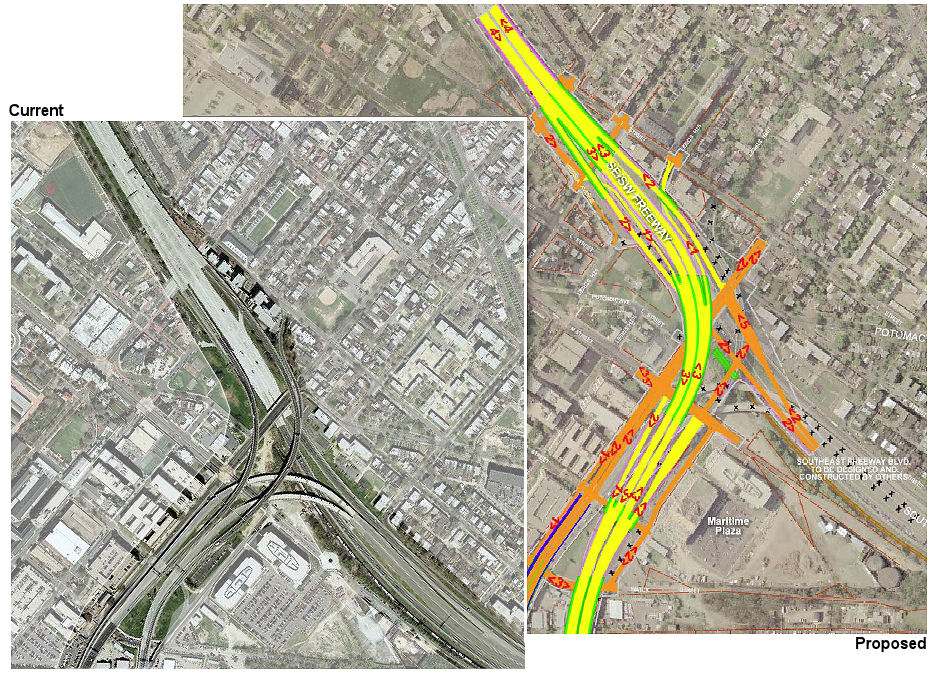 On Wednesday DDOT announced a new web site, called Anacostia Waterfront: Realizing the Vision. It's billed as a "centralized location for updates about the Anacostia Waterfront, as well as project-specific information and links," though as of now the only detailed project information is for the plans to replace the 11th Street Bridges, there there are also links to the Anacostia Waterfront Framework Plan and the Comprehensive Plan.
The items on the 11th Street Bridges include those that I blogged about late last week, as the city starts to move forward to procure design/build services for the project. They've posted the presentation slides from Monday's informational meeting, which mention the goal of meeting or beating the construction completion date of Dec. 31, 2013 (mark your calendars). DDOT expects to release the Request for Qualifications on Aug. 15, followed by a Request for Proposals by the end of the year, with a contractor selection and agreement completed by June of 2009, so that work can begin soon after.
This new web site repeats what I saw on the 11th Street Bridges EIS web site, that the city "will remove the existing flyover ramps to RFK this summer," but doesn't have any additional details. (Summer does technically run until mid-September, I guess.)