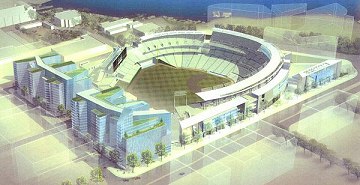 According to the Post's DC Wire blog, the final chapter of the Garages Wrapped With Development Goodness saga has now been written: "Developer Herbert Miller has settled his $40 million lawsuit against the District government over the failed plan to build two 13-story condominium towers just outside Nationals Park. Under the settlement, the city will pay Miller's Western Development $2 million and the company will drop its legal grievances, according to Miller's son Ben, who is now the company's president." Above is the design for the condo/garages, and here's my various entries on the Miller plan. While you look at those links, think about the current four-story parking lots in the outfield and imagine them with another eight stories on top. And no centerfield plaza, either.