1 Blog Posts
Jun 6, 2010 2:47 PM
Sunday Rearview Mirror: The 1977 Cinema Follies Fire
(For someone who graduated from college with a degree in history, I have done a lousy job over the years of documenting the history of Near Southeast with anything approaching the zeal of my coverage of its present and future. I can offer no good excuses, but I'm going to begin to rectify this with a new series, "Sunday Rearview Mirror." I don't pretend to have the level of knowledge or experience of the pre-ballpark era as those who passed through Near Southeast during those years, but hopefully by taking the time every so often to highlight and describe events from the past I can help make sure that the new residents and workers who only recently heard of Near Southeast have some awareness of the people and events that came before them.)It was in the 1970s that the western edge of Near Southeast became home to a new entertainment district for the city's gay residents, with its remoteness and lack of nearby residences allowing some measure of freedom for a culture that was only just beginning to step out of the closet. The area between South Capitol and First streets--with clubs like the Lost and Found, Club Baths II, Grand Central, Waaay off Broadway and Washington Square--became home not only to nightclubs with dancing and music but also but bathhouses, x-rated movie cinemas, and strip clubs. One of the new clubs was the Cinema Follies, which opened in 1975 at 37 L St., SE, showing x-rated gay films. 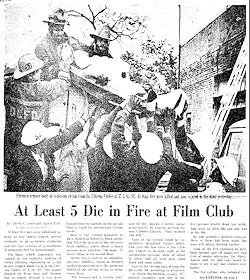 On Oct. 24, 1977, an explosion on the ground floor triggered by cleaning chemicals started a fire, with flames quickly consuming carpeting and wall hangings, blocking the exit for the patrons who had been in the 50-seat second floor theater. The fire never reached the second floor, but the smoke quickly became overpowering. However, a door that led to the roof was padlocked, and the windows had been replaced with cinderblocks. According to the Washington Post's account, "most of the victims were found in the orange-and-black theater seats [...] and may have been overcome by the smoke before they realized what was happening."
Nine people died as a result of the fire, making it the deadliest fire in Washington DC up to that time, a mark that stood until a fire at an unlicensed group home on Lamont Street, NW, killed 10 in April 1979. Identification of those who died at the Follies was hampered by the fact that, as the Post reported, "Many homosexuals do not carry identification when they visit homosexual gathering places," being "wary about the possibility of jeopardizing jobs or social position by having nonhomosexuals learn of their sexual orientation" in case their presence at club might be made public "through a police raid or other event."
(An interesting sidelight to the issue of identification was a column by Post ombudsman Charles Seib soon after the fire, questioning the Post's decision to not use the full names of some of those who died and no names at all of the injured. The column quoted then-Managing Editor Howard Simon as saying that the paper's main motivation was "compassion for the wives and children" [since some of the victims were married] but Seib went on to ask whether this approach had the effect of "underscoring the stigma of homosexuality, of shoving it back in the closet at a time when efforts are being made to bring it out and address it as a social fact?" This is an issue that papers still clearly struggle with, even today.)

William Oates, the manager of the club, was eventually fined $650 in 1979 for violating four building codes, though city officials stated that Oates "did everything possible" to try to comply with the laws, but poor city record keeping and poorly written codes made it difficult. (The city did work to strengthen its codes in the wake of the fire.) However, nearly eight years after the fire, in September of 1985, families of four of the victims were awarded more than $1.5 million in a civil suit against the club's owners. 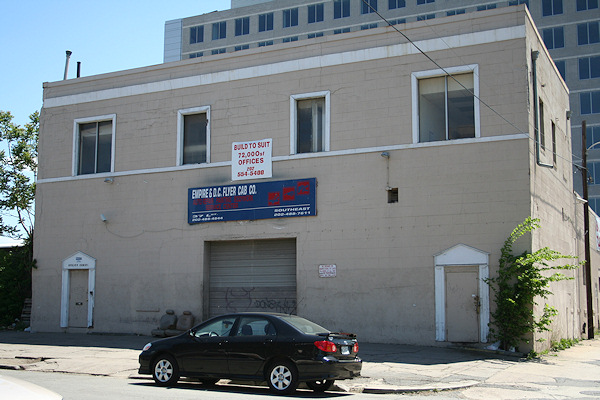 Within a year or the fire, Oates opened "The Follies" at its new location at 24 O St., SE, where it operated until it was demolished with many other gay nightclubs in May 2006 to make way for Nationals Park. Somewhat amazingly, the building where the Cinema Follies fire took place, which was not all that heavily damaged, still stands today, on L Street directly across from the under-construction 1015 Half office building. It's currently home to a cab company.
I plan to write more Rear-View Mirror entries in the future about the neighborhood's past as a nightclub district, but until then, this 2003 pamphlet by the Rainbow History Project gives a great overview of the clubs that used to be such an integral part of Washington's gay culture. Hard to believe that, when the pamphlet was written, the authors had no idea how little time the existing clubs had left.