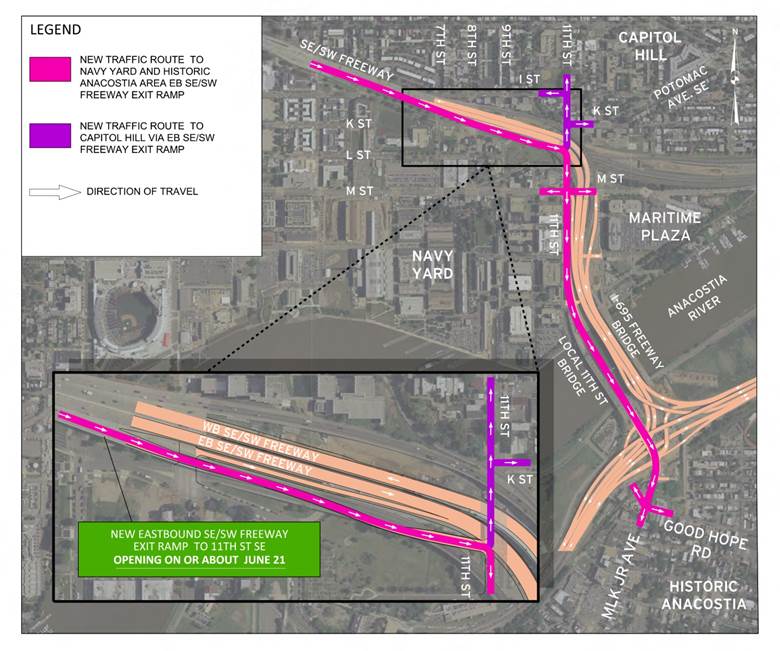 The next step in the 11th Bridges project is coming on or about June 21, when the new ramp down to 11th Street SE from the eastbound Southeast Freeway is scheduled to open.
This means that folks on the eastern end of Capitol Hill will no longer have to get off at 6th Street and wind their way eastward--they will arrive at 11th just north of L, and can either turn left on 11th or right to the Navy Yard and across the 11th Street Local bridge to Anacostia.
The map at right provided by DDOT shows the various new movements that this new ramp will put on the table.
Coupled with the entrance ramp to the westbound freeway that opened a while back, 11th Street is now quite the access point for the Southeast/Southwest Freeway. And someday, it will be a full intersection that will include traffic traveling to or from Southeast Blvd., in whatever form that ends up taking.
Jun 5, 2014 12:23 AM
Thursday Tidbits: Plain White Concrete Sandlot

As you can see, If you rent one of the Twelve12 units on the north end of the building, you'll have a great view of the construction at the Lofts at Capitol Quarter.
Now to the tidbits:
* The latest on the Xavier Cervera mess. (WSJ)
* Apparently there is a void that can only be filled by a PROFESSIONAL. (City Paper)
* The 11th Street Bridges project receives an Award of Excellence in Concrete from the National Capital Chapter of the American Concrete Institute. No, really. (Hill Rag)
* The Courtyard touts its makeover. (Press release via Yahoo)
* How does DDOT see the city's multimodal future evolving? Check out the MoveDC draft transportation plan.
And, on the agenda:
* On Thursday, the Nats play the Phillies at 4 pm, which clears the evening for the first NatsLive concert of the season, with the Plain White T's. The show is free for anyone with a ticket to the game, though there's no truth to the rumor that they will just play "Hey There, Delilah" 17 times in a row.
* Then at sundown the Capitol Riverfront Summer Outdoor Movie Series kicks off at the northern end of Canal Park with the Sandlot.
* On Friday, Sam O brings reggae to the Yards Friday Night Concert Series, starting at 6:30 pm.
* If you can think this far ahead, it's been announced that Snallygaster is returning to the Yards, on September 13. "An epic day of inimitable imbibery and monstrous merriment featuring over 200 craft drafts."