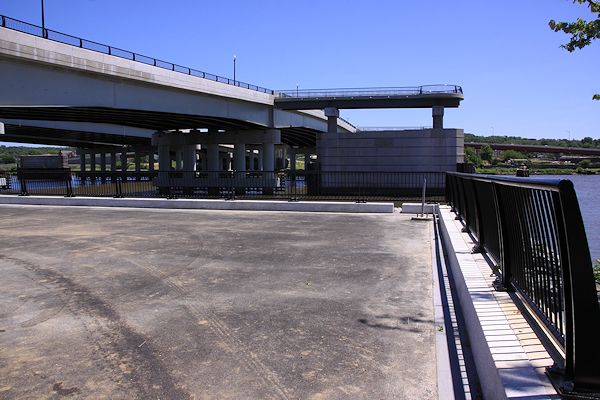 The process continues to create the 11th Street Bridge Park, with the announcement on Tuesday of the four teams picked for the final stage of the design competition.
The park, which will use the piers still standing after the demolition of the old outbound 11th Street Bridge, would create a new type of connection between the east and west sides of the Anacostia River, and is described by its supporters as "an iconic new civic space that will provide a unique venue supporting the community’s environmental, economic, cultural and physical health."
The design teams chosen are made up of landscape architects, architects, and structural engineers, and have been given $25,000 to create their submissions. The teams are:
• Balmori Associates / Cooper, Robertson & Partners / Guy Nordenson Associates
• OLIN / OMA / Arup
• Stoss Landscape Urbanism / Höweler + Yoon Architecture / Robert Silman Associates
• Wallace Roberts & Todd (WRT) / NEXT Architects / Magnusson Klemencic Associates
The park's jury expected to choose a final design this fall.
And on June 10, members of the public will be able to hear from the four teams (one of which includes OLIN, designers of Canal Park) The event runs from 6:30 to 8 pm at THEARC, 1901 Mississippi Ave., SE.
In the meantime, fundraising continues for the project, which could cost around $40 million for both construction and operations. Earlier this month council member and transportation committee chair Mary Cheh inserted into the city budget currently under deliberation $14.5 million over the next three years to partially fund the project. (This money is apparently coming from the city's decision to go with a fixed-span new Douglass Bridge rather than replacing the swing span, which is saving about $140 million.) The rest of the construction financing would be raised from private sources. In addition, about $840,000 has been raised toward the $1 million "pre-capital campaign goal."