As the city's FY16 funding process reaches its crunch time, the council late this afternoon released its amended budget.
And deep in the multitude of documents and words is the "11th Street Bridge Park Funding Limitations Act of 2015," which states that "no funds allocated for the Park may be awarded or disbursed for purposes of construction until at least 50 percent of the total projected construction costs of the project have been raised from private donors."
The act also "prohibits the use of District funds for the purpose of operations or maintenance" of the planned park.
The piers left from the now-demolished downstream 11th Street Bridge span would be used to build this park, running from just east of the Navy Yard over to Anacostia Park, has a $40 million price tag attached to it, according to published reports.
The District has previously committed to providing $14.5 million of the $25 million construction costs, and a fundraising campaign is underway to fund both the $10.5 million construction funding gap and the estimated $15 million in operations funding.
The council will be voting on its proposed budget tomorrow, Tuesday, May 27.
May 26, 2015 5:14 PM
Norton Urges Use of Federal Land for New Barracks Site 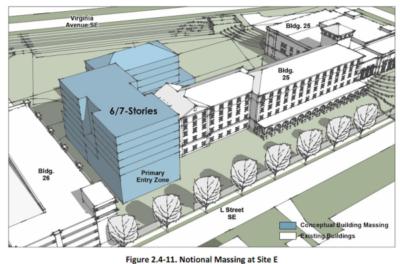 I wrote a few weeks back about the release of the draft EIS in the ongoing search for a site for a new Marine barracks, and about the five sites the document analyzed, three of which are on privately held land or privately-controlled land (at 8th & Virginia, 11th & M, and in the northeast corner of the Yards), and two of which are at sites under federal control, within the walls of the Navy Yard and on the current Bachelor Enlisted Quarters land at 7th and L.
Today, DC Delegate Eleanor Holmes Norton released her comments on the study, saying that the private sites "should not be chosen because of the significant negative impacts on District residents, District business owners, and the District economy" and that the Marines "cannot now swoop in and take these prized sites in a city that has almost no land left for development for the benefit of its growing population and businesses."
In comparison, she says, the two sites on federal land "will protect private landowners and lessees in the District while at the same time providing the opportunity for increased economic development at the current Building 20 site" (at 8th and I).
The period for commenting on the EIS ends today, May 26. so if you are desperate to add your voice, I would hope you can submit via the web site until midnight.
My post on the draft EIS is far more detailed than this quickie update, so I suggest reading it for further background.
May 26, 2015 4:40 PM
Virginia Avenue Tunnel Injunction Denial Appeal Denied

Today Judge Christopher Cooper has denied the Committee of 100's appeal of his April ruling denying the group's request for an injunction to prevent CSX from moving forward on the Virginia Avenue Tunnel construction while the C100 lawsuit works its way through the process.
Quoting from the order: "The Committee contends that new information gleaned from the recently-produced administrative record demonstrates that the federal and local agencies involved in the environmental review of the reconstruction project unlawfully predetermined its outcome. The Court concludes, however, that the Committee’s new evidence does not satisfy its burden to demonstrate that the agencies failed objectively to consider the environmental impacts of the reconstruction. Accordingly, it will deny the motion."
The Committee of 100 had filed their appeal in May, saying that new access to the "full record in the case," all 130,000 pages of it, showed "persuasive evidence of improper predetermination that was not available to the District Court" at the time of the initial injunction denial. But Judge Cooper wrote that "the portions of the administrative record provided by the Committee do not support its position that DDOT unlawfully predetermined the NEPA outcome or that FHWA failed to independently consider the environmental effects of the tunnel reconstruction."
You can read the full opinion/order for more detail.
(And, whaddya know, C100 is still using my photo on their web site! UPDATE, 5/27: It took a bit of back-and-forth, but the photo is now taken down.)