We've been calling it Ballpark Square, but now the Grosvenor/McCaffery residential, hotel, and retail project along 1st Street SE between M and N has its official name:
F1rst.
(Yes, that's a numeral "1" in place of the "i".)
We also now have an operator for the 170-room hotel--it will be a Residence Inn by Marriott, joining the chain's Courtyard location that's been in the neighborhood since 2006.
The residential building will have 325 units--a mix of studios through 2 BR/den--plus a fitness center, club room, outdoor courtyard, garage with bike parking, and a rooftop deck with a pool, grilling stations, dog park, and an "outdoor multimedia theatre" on the building's southwest corner that will have stadium-style seating and a view into Nats Park.
It will take about two years for the buildings to be completed, though some retail tenants could move in starting in the first quarter of 2017.
And, as I reported a few weeks ago (even though nobody believed me), Taylor Gourmet and Chop't are already signed for some of the project's 25,000 square feet of retail.
The event today did not have shovels and hardhats--which made sense given that the ground has already been broken--but there were dignitaries and speeches, and a ceremonial throwing of baseballs into the construction footprint.
I took photos, of course, and here's the full gallery. A few snippets here, though: It took way too long, but last week I finally got my first real look in and around Toll Brothers's Parc Riverside apartment building at 1st and K streets, SE.
It's been open to move-ins for a few months now, even while final construction activities were wrapping up, but on April 2 they threw a not-small grand opening party, where I took advantage of getting in a little ahead of the crowds to snap some quick shots of the communal spaces, the roof, and the model unit. (I also used the occasion to grab overhead photos of the holes in the ground at 82 I and 909 Half.)
Here's a smattering of images (click to enlarge), but check out the gallery for the complete lineup. 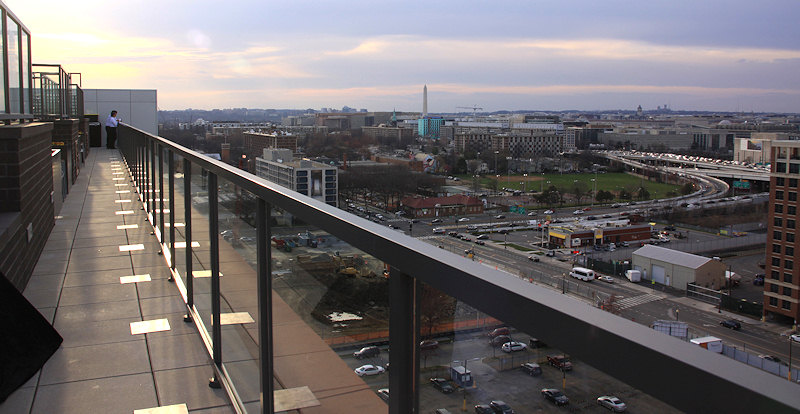 (I know the pictures with shots of the Capitol dome will *thrill* anyone who lives at Velocity.)