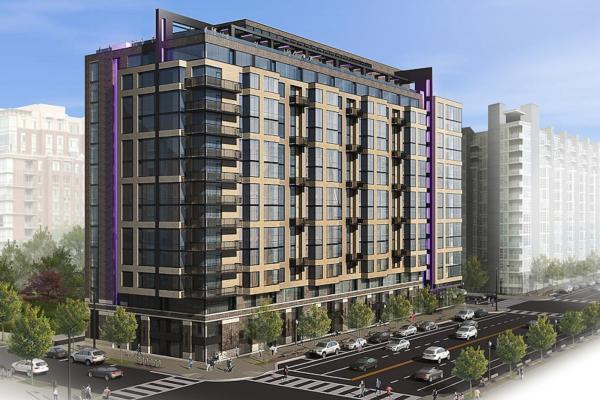 * 1000 1ST, FOR REAL: As much as I liked coming up with my own vision for the lot on the east side of 1st between K and L, Paradigm has now graciously passed along the actual rendering for the 275-unit residential project that is now in the early stages of excavation. Note that the purple portions of the rendering are lights that will rotate through different colors.
* EIGHTEEN EIGHT DEAD: There have been inquiries from readers lately about the status of the "fine men's salon" that was supposed to be coming to Tingey Street at the Foundry Lofts, and now commenter NavyYahd has passed along this link to the company's web site, saying that "18|8 Navy Yard will no longer be opening in Washington, D.C." So, when you still see lots of scruffy dudes around the neighborhood, that's probably why.
* DOUGLASS BRIDGE DESIGN THUMBS UP: The actual meeting isn't until Thursday, but the National Capital Planning Commission's staff is recommending approval of the design of the new Frederick Douglass Bridge. If this bridge is of interest to you and you are hankering for more details, I suggest paging through the city's submittal for this latest review, along with the voluminous staff recommendation. I grabbed some images from the submittal and have added them to my project page, but wanted to highlight these two, showing what the side paths and overlooks on both sides of the bridge will look like, along with what the view up South Capitol from the planned traffic oval at Potomac Avenue might look like. Pre-construction work is already underway for this project, which includes not only the bridge and two ovals but also the reconstruction of the Suitland Parkway interchange. 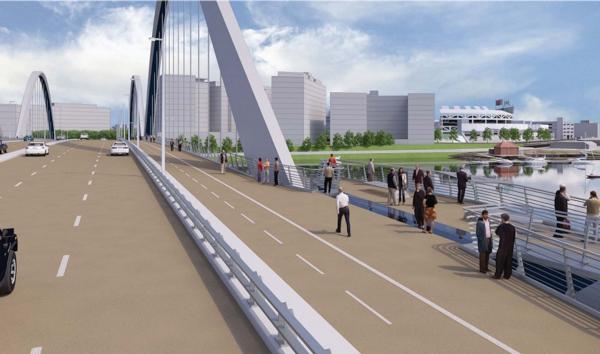 * ANACOSTIA RISING: Local radio station WAMU has posted Anacostia Rising, an in-depth look at "The River Washington Forgot." Sometimes labeled one of the most polluted rivers in the United States, this multimedia offering looks at how DC is "rediscovering the long-neglected waterway," and what that means for the neighborhoods along the river. (So maybe this is a good spot to also mention last week's opening of the Anacostia River tunnel leg of DC Water's massive Clean Rivers Project.) And mark your calendars for the fourth annual Anacostia River Festival, on Sunday, April 15, from 1 to 5 pm.
* OFFICIALLY ALL-PURPOSE: Today is the official opening date for All-Purpose Pizzeria, on the river in the ground floor of Dock 79, at 79 Potomac Ave., SE. Hours are from 4 to 10 pm Sunday through Thursday, and 4 to 11 pm Fridays and Saturdays. Here's the dinner menu, and here's a sneak peek from the Hungry Lobbyist.