4 Blog Posts
Apr 2, 2008 11:30 PM
Wednesday Night Ballpark Story Roundup
* If you haven't been inside the ballpark yet and want a free visit on either Friday night (April 4) or Saturday afternoon (April 5), WTOP tells you how. (Hint: it involves signing up for the Nats promotional e-mail list.)
* The credit crunch on Wall Street has caused the interest rates on a small portion of the stadium bonds to skyrocket, says the Examiner.
* WTOP says that Metro feels pretty good about its performance on Opening Night (as do most riders, at least evidenced by the comments you folks have been posting), but they've got a few tweaks in store for the homestand next week. They'd like you to stretch out on the Navy Yard platform, please, and will put in more trash cans so that people can toss drinks and food and cigarettes when they get to the station.
* Speaking of the Navy Yard station, if you've done that walk up Half Street and want information on what's planned there beyond the renderings on the east-side fences (or want to see what was there up until about 18 months ago), check out my Monument Half Street page. Plans for the west side of the street, where the Southeastern Bus Garage has now been vacated by Metro, are stalled thanks to a lawsuit brought by Monument against WMATA after the land was sold to Akridge in a way that Monument contends was unfair.
* This is a little old, but I'll toss it in anyway (I *think* I haven't already linked to it; it's all just a blur now)--MLB.com reports that Stan Kasten was very happy with how Opening Night went in terms of the fan experience.
Apr 2, 2008 3:46 PM
Yards/401 M Street at NCPC, ANC 6D (Again) 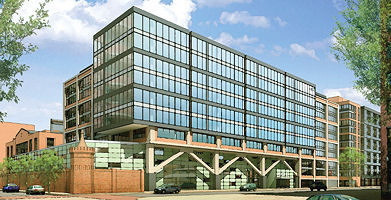 As I wrote a month ago in an entry that was visible for about five minutes thanks to all of the ballpark news, the first new-construction buildings at The Yards are now winding their way through the zoning process. It's two buildings that look like one--a 320,000-square-foot 10-story office building at 401 M Street and an 11-story 180ish-unit apartment building to its south at 400 Tingey Street. They would both have ground-floor retail, but it's what's planned for 401 M that will probably have everyone's attention, because a grocery store is proposed for that space, just inside the historic wall and sentry tower on the southeast corner of Fourth and M. The office building would be LEED certified, and the 20 percent of the residential building would be affordable housing units (up to 50 percent of the area median income).
The Parcel D plans have already been reviewed by the National Capital Planning Commission in advance of its meeting tomorrow (April 3), with the executive director reporting that the buildings are not inconsistent with the Comprehensive Plan and do not adversely affect any other federal interests.
The Zoning Commission Southeast Federal Center Overlay Review of the plans and three associated variance requests is now rescheduled for April 24. ANC 6D will be bringing it up again at its April 14 meeting, after electing not to vote on the project at its March 10 meeting because of the lack of a community benefits package--see the summary of the meeting in the April Hill Rag (I was out of town, and so don't have any additional details).
As for start dates, documents earlier in the year had the office portion getting started in 2008 for a 2010 delivery, and the residential portion starting "based on market conditions." However, a reader is reporting that a sign now up at Fourth and M says "Coming 2011." I'll see if I can get any further details. (UPDATE: Yup, 2011 is now the current "estimate" for the project. So, don't stop shopping at the Capitol Hill Safeway just yet.)
In the meantime, work on renovating the Boilermaker Shop at Third and Tingey into a 46,000-sq-ft retail pavilion should be starting Any Minute Now, as should the rehab of the Pattern Joiner Shop across the street into a 170-unit apartment building. Both are expected to be finished in 2009. (Did you see the light displays being projected onto the Pattern Joiner building during the ballgames?) The Factory 202 residential rehab of the old Gun Mount Shop at Fifth and M, which is a joint project between Forest City and PN Hoffman, also now has a "Coming 2011" sign.
Apr 2, 2008 1:59 PM
Reviewing the Ballpark Food
If you're interested in knowing everything about the food at the ballpark, check out all the Washington Post offerings today, starting here. There was also a chat with folks from the Food section staff. UPDATE: For a different point of view on today's Food section offerings, I point you to the Washington City Paper's City Desk blog.
Apr 2, 2008 12:48 AM
Street Vendors to be Allowed at Ballpark; Deputy Mayor Project Auditing; Officials Battling Over Tickets
From NBC4, word that on Tuesday the city council unanimously passed legislation to allow street vending at Nationals Park: "On Tuesday, [Ward 3 council member Mary] Cheh introduced emergency legislation requiring Mayor Adrian Fenty to come up with 40 vending spots in 21 days, including 23 spots for veteran vendors of RFK. The spaces will be distributed by lottery." The council had passed legislation to overhaul of the city's vending rules last month, but the new regulations weren't getting written quickly enough to get vendors in place by the ballpark. The Post has more.
The council also voted unanimously to "create a body within the D.C. Auditor's office that will perform a one-time audit of completed projects on land that is now controlled by Neil Albert, deputy mayor for economic development, but was once under the control of the defunct public-private National Capital Revitalization Corp. and the Anacostia Waterfront Corp.," according to the Washington Business Journal. This would include Canal Park and Diamond Teague Park, and is being done to "ensure that developers keep promises to build affordable housing, meet environmental standards, hire District workers and involve local and disadvantaged businesses when they receive public land or financing."
Meanwhile, Bruce Johnson reports on his blog (with photo credit in place--thanks!) that there's been some behind-the-scenes battling between the city council and the mayor's office over who would control the complementary tickets to the two suites at the ballpark designated to the city. It sounds like an agreement has been reached where the mayor will control tickets to one suite and council chair Vincent Gray the other. (Geez, even *I* could have come up with that solution.) UPDATE, 4/2: Now Bruce says there's still no agreement. Part of the problem is that the executive branch, city council, and sports commission had 148 tickets to work with at RFK, and only have 48 at Nationals Park.