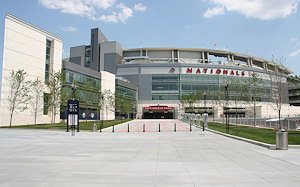 [I'm just back from a week in Florida (hence the spring training pics), and today I'm celebrating the ultimate April Fool's joke (getting married in Vegas 12 years ago today!), so I'm going to ease back into the blogging thing.]
The Washington Post has a big A1 piece today by Marc Fisher looking at the area around Nationals Park, as well as the performance of the team and ballpark from an economic standpoint, in the four years since the ballpark opened.
For people who follow the neighborhood closely (i.e., JDLand readers), there's probably no new nuggets of information, but it's good as a "reset" piece if perhaps you haven't followed every twist and turn since the Nationals first came to DC in 2004.
There's also some additional detail and points of view from across the South Capitol DMZ, which of course I don't generally write about here. [Though, ugh, "Capitol Street"?]
Nats blogger William Yurasko does a good job breaking out the article's bullet points, if you want the Cliffs Notes version of the piece (since I'm not providing one!). But this part of the article probably stood out the most to me:
"The worries that [council member Jim] Graham, former mayor Adrian Fenty and other opponents shared about the ballpark becoming a financial dead weight seem to have been for naught.
"In the past three years, the ballpark fee, a tax levied on the city's 1,800 largest businesses, has brought in $85 million, double what the city had projected. Sales taxes at the stadium have lagged behind estimates because of lower attendance, but the city's overall take has been so strong that millions in excess collections have been used to balance the D.C. budget. The gusher of tax dollars will allow the District to pay off the 30-year stadium bonds as much as 12 years early, which will let the city scrap the business tax sooner than planned[.]"
If you want to know more about what's changed just within the past few months around the stadium, my new Visiting Nats Park page has a "What's New" rundown, along with much more information and photos from the stadium's construction and big events. Or you can click on the map at above right on the home page (or visit my full project map) to dig in more deeply to what's happened not only since the ballpark opened but going back to 2003.
[Full disclosure: while I worked on the big map graphic that accompanies the article, I had zero to do with the article itself--though I think my web site helped out!]