It's late, I'm only just now finally getting warm again, and it's not particularly hard to find photos from tonight's first major league ballgame at Nationals Park, so I have just tossed together three Quick Galleries of the festivities, a selection of images that are nowhere near complete when it comes to capturing the look and feel of Nationals Park during its first big test. I'll caption them Sunday before heading off to do it all again at the "real" Opening Night.
Page One is photos from when the gates opened and during batting practice; Page Two has close-ups of the pre-game ceremonies with all the representatives of the city (but no Mayor Baseball!); Page Three has photos from during the game showing various vantage points.
The media has full coverage of course, but I'm not going to go on a linking spree (here's the Post homepage to start you on your own hunt). The initial storyline seems to be that it basically went well, with fans and players alike gaga for the ballpark, but with some snafus when it came to long long lines for food (especially at Ben's Chili Bowl) and for the subway and Nats Express shuttle to RFK after the game, though nothing that was catastrophic. We'll see how it goes with a full house on Sunday. But I must say it was a bit of an out-of-body experience to be walking among a huge throng of people along M Street SE between First and New Jersey at 9:30 pm on a Saturday night. This is not your father's Near Southeast anymore.
Check back late Sunday (or early Monday) for photos from Opening NIght.
UPDATE: Captions now added. Oh, and the Nationals won 3-0. 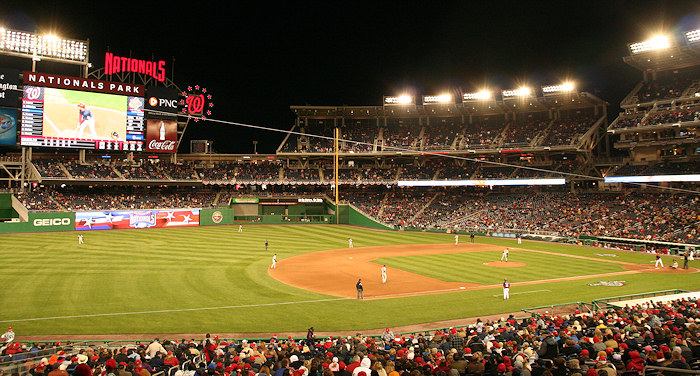