This weekend the Nationals are coming home to start their sixth season at Nationals Park (can it all really be five years ago?). They return to the ballpark on Friday at 2:05 pm for their final exhibition game, against the Yankees, then the 2013 season starts for real on Monday at 1:05 pm against the Marlins, followed by two more games against Miami on April 3 and 4.
Residents and office workers should be prepared for very large crowds on both days, and given that both are day games, be prepared for extra-heavy traffic on the roads and in the subway.
A few links and items for those coming to the game or just those nearby:
* My Visiting Nats Park page has the basics on how to get to the game, where to park, what the options are for food and drink outside the ballpark (now and coming soon), and what is new in the neighborhood since last season.
* I'm looking for crowdsourcing assistance to make sure my map of gameday parking lots is up-to-date for the new season. Tweet #parknats (or just mention @jdland) with lot locations and prices you see during these first four games. (Especially of interest is what the former lot HH will be charging.) Prices may be higher on Opening Day than for other less-showy games, so all intel from any game day is appreciated.
* The return of baseball also means the return of expanded hours for the Union Station-Navy Yard Circulator route, which on April 1 will start running until 9 pm on weekdays and from 7 am to 9 pm on Saturdays, with additional expanded service on game days (this includes Sundays).
* The new Gordon Biersch brewery/restaurant at 100 M St. SE is in its final preparations for its Opening Day opening. They are in the midst of soft opening/test service, and there will be a "VIP" reception on Saturday night, so be prepared to see people inside but then be turned away at the door if you don't have a golden ticket. UPDATE: Biersch will be opening at 10 am on Opening Day (compared to its normal 11 am).
* When will the Park Tavern at Canal Park have its own opening day? "Soon" is what the signs on the doors say, but there's been no official word of a date yet. (The latest newsletter from the BID says "mid-April," but the Going Out Guide says April 1.)
* The Fairgrounds at Half and M is back for the 2013 season beginning Friday at 11 am.
* Inside the park, Papa John's has replaced Flippin' Pizza, and there's also now the Schawafel stand, featuring Shawarma and Falafel sandwiches.
* Weatherbug has a Nationals Park station, if you want to know what the current conditions are right smack at the ballpark. The forecast for Opening Day looks good as of now (mostly sunny and 61), but it might be a bit chilly for those other two Marlins games.
Let the Natitude begin!
PARKING UPDATE: I've heard from Monument Realty that they are still planning to operate the old Nats lots J, M, and N as cash lots this season, but they aren't open today and won't be open next week. They are shooting for the week of April 8. These are the lots at Half and M, South Capitol and M (old Domino's site) and South Capitol and N (old BP Amoco), and are marked on my map as TBD.
PARKING UPDATE 2: A reader reports that the old lot HH operated as a cash lot for Friday's exhibition game, still charging $10.
PARKING UPDATE 3: Be prepared that the prices at the three Yards lots have gone up $5 from last season, so $25 at 3rd and Tingey and $30 at 1st and N. The lot behind the wrought-iron fence at 1st and M will be $35, but it will also be open for every game this season.
And, a question I had a few weeks ago has finally been answered: the new Nats Lot P is indeed the garage under 1015 Half Street, and not a surface lot as the Nats map shows. Their map will be updated; mine is already correct.
Mar 28, 2013 2:00 PM
Biersch Gearing Up; Photos (Of Course)
I was lucky enough to get invited one of the dry runs that Gordon Biersch is holding over the next few days to prepare the staff for their April 1 opening (because, with 40,000 Nats fans descending on the neighborhood, Biersch might get a bit of business). And they allowed me to take a pile of photos. I'll include the money shot here: 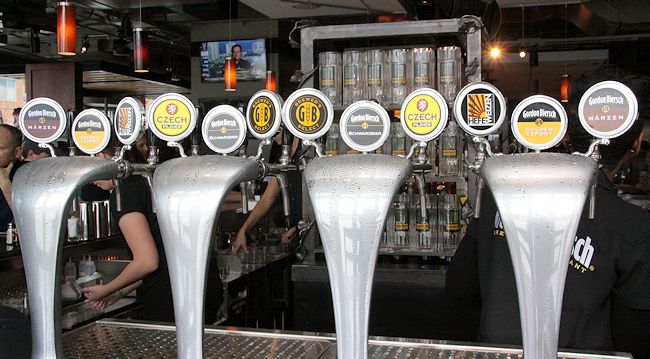 See all the pictures here.
There's one more day of test seatings on Friday, and then a VIP reception on Saturday.
It's a pretty dang big space. Definitely a completely new experience in the neighborhood!