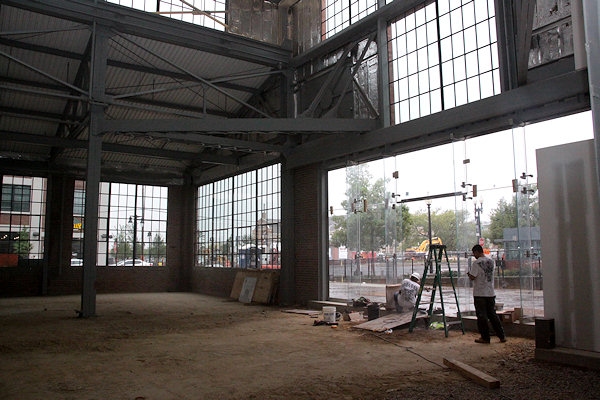 Now that the Park Tavern looks just about ready to open (and the grapevine tells me it got its liquor license on Monday morning), it looks like Xavier Cervera is turning his attention to the project we have known as Willie's Brew and Que at the Boilermaker Shops at the Yards.
According the latest batch of approved building permits, a building permit has been issued (to Williams Willies Sports, technically), for a restaurant with 109 seats and 156 occupancy load.
So now everyone can start keeping an eye out for any work in the space on the Boilermaker Shops' western end, on Tingey at 3rd Street. (The photo above is from a visit I made to the Willie's spot back in September.)
Other items worth noting in the latest permitting blitz:
* The Park Tavern has gotten its permit for a 75-seat summer garden.
* Gordon Biersch's outdoor seating has been reduced from a 94-seat area to a 60-seat summer garden.
Then there's this additional tidbit, which needs to have a glaring "CONJECTURE!" label attached to it. But a few weeks ago EYA got a soil boring permit for 908 2nd Street, SE, which is the empty parking lot owned by the Housing Authority between I and K and between Canal Park and EYA's now-completed Capitol Quarter townhouse project. I have heard rumors for a while now that there's been talk of another deal between EYA and DCHA, though not for townhouses this time around. The empty lot where the soil borings took place is part of the Capper Hope VI footprint, and the plans have always been for a six-story, 147-unit mixed-income building on that site. Is something in the works? All together now: We shall see!