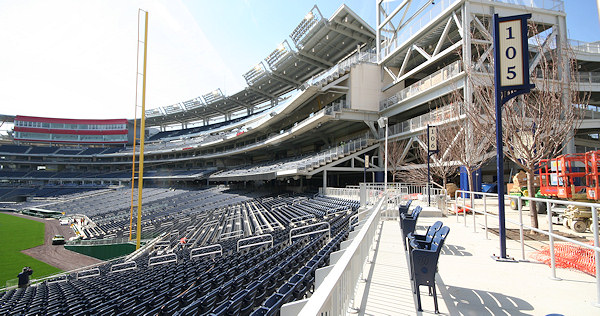 This morning the Usual Suspects re-assembled at the ballpark to plant one of the 14 cherry blossom trees being installed along the centerfield concourse and at the Center Field Gate plaza. And the sun was out! That never happens! Here are some quick photos of the event itself, and check back later today for an update to my Stadium Interior Gallery with a bunch of new photos from centerfield and the plaza. (If you're a fan of my large panoramas, here's one from today taken from the Red Porch restaurant, to whet your appetite for the photos coming later.)
UPDATE: More new photos from today now posted in the Stadium Interior Gallery, mixed in with others I've posted in the past two weeks. So you have a wide range of hideously-dreary-to-fabulously-sunny vistas to look at.
And I'll keep updating this section with links to any media coverage, starting with Dan Steinberg's Sports Bog report. And, as a commenter noted elsewhere, today officials announced that peak cherry blossom time is expected to be March 27 through April 3. With Opening Day smack in the middle. Tim Lemke has a blog entry about the ceremony today as well.
Mar 6, 2008 8:39 AM
Roundup: Ballpark, Parking Signs, Satellite Image
* The Mayor took some Congressional bigwigs around the ballpark yesterday. Today, the cherry blossom trees are being planted along the concourse in left-center field. Check back later today for photos. (And the sun will be out in them! How revolutionary!)
* Tony Knott of the WashTimes gets snarky about traveling to the ballpark.
* If you want to see what the new Enhanced Residential Parking Permit signs look like, drive along I Street SW between Third and Fourth--on the north side of the street you'll see new red signs saying Zone 6 Permit Holders Only, 7 AM - Midnight, Monday - Sunday"; on the south side of the street are the more familiar green signs that say "Two Hour Parking Only - Zone 6 Permit Holders Exempted", but they now have new stickers slapped on that say "7 AM - Midnight, Monday thru Sunday". DDOT must have hit the streets the second the bill passed on Tuesday! And, of course, the kiosk parking meters are cropping up in more locations.
* I've been meaning to post about this when there was a lull (HAH!)--Mapquest has updated its satellite image of Near Southeast to November 2006, showing the steelwork underway at the ballpark. I've added it to the bottom of my Satellite Photos page, even though it's only a few weeks later than the last "newest" image (from Live Search). You'll see that I've tweaked this page a bit so that you can now pick and choose which photos to display (since it's getting to be a huge page)--for instance, maybe you want to see just the 2002 and late 2006 photos.
UPDATE: I knew there was something else I meant to mention. The stadium web cam shows that advertising banners are going up on the eastern parking garage.