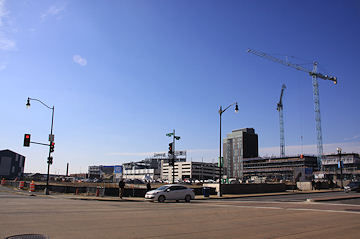 The Sakura Matsuri Japanese Street Festival, one of the largest of the annual events associated with the National Cherry Blossom Festival, will be relocating to New Jersey and M Streets SE this year, thanks to a squeeze on Pennsylvania Avenue resulting from the impending opening of the Trump International Hotel.
The festival, which attracted more than 40,000 people last year, will be held Saturday, April 16--and with the festival listing its entrances as being at New Jersey and N, First and N, and First and M, it appears to be on the footprint of the Yards, at the former Spooky Building 213 and (eventual Spooky Park) site. (If so, there's a lot of dirt to be covered over in the next five weeks!)
The festival bills itself as the "largest one-day celebration of Japanese culture in the United States," and the "grand finale of the National Cherry Blossom Festival." Alas, the official festival web site has not yet posted a 2016 program guide, or festival map, but tickets are on sale for $8 in advance--they'll be $10, cash only, at the gates. There are some details available on the food/beverage and "Bring Japan Home" offerings.
It doesn't sound like this is a permanent move, with WBJ quoting the president of the Japan-America Society as saying that “We’re already thinking ahead to 2017 to see where we might need to go."
The Cherry Blossom Parade is from 10 am to noon along Constitution Avenue, with Sakura Matsuri running from 10:30 am to 6 pm, so judicious non-attendees will definitely want to avoid the Green Line that day.