2 Blog Posts
Feb 14, 2012 9:02 PM
Late Tuesday Tidbits: Tweets Possibly Lost in the Deluge
It's starting to feel a lot like 2007 around these parts, with all the big news flying. (In fact, today's posts brought JDLand its highest traffic since all the ballpark opening falderal in early April 2008.) But I wouldn't want people to miss a couple little items tweeted over the past few days:
* New Dry Cleaners - Buried in the press release on Osteria Morini is the news that a dry cleaners is now the first non-food retailer signed as a tenant at the Boilermaker Shops. According to Forest City, Wells Cleaners will be taking 800 square feet of space.
* A Theater? Or Even A Theatre? - The Examiner reports that indy-friendly Landmark Theatres is wanting to open a second location in the District to go along with its E Street Cinema. While the article emphasizes that city officials are very much hoping that Landmark will consider an East of the River location, the director of the city's Office of Motion Picture and TV Development says that Landmark "is also looking at the Yards neighborhood[.]" Whether this truly means in the Yards itself or somewhere in the general Near Capitol Ballpark River Yards area, this news is certainly the sort of tidbit that gets residents veeeery excited. (Full disclosure: I see a lot of movies at E Street.)
* Concerts and Pups: The Nats released their 2012 promotional schedule, which includes three post-game concerts, fireworks after the July 3 game, and four Pups in the Park dates. My cat is currently contacting attorneys. Also, single-game tickets go on sale March 8 at 10 am.
Feb 14, 2012 2:25 PM
Lumber Shed Restaurant Announced: Osteria Morini 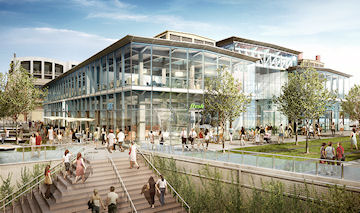 The first tenant for the Lumber Shed building at the Yards Park has just been announced by Forest City: the Italian restaurant Osteria Morini, by New York City chef Michael White. It will be a 4,250-sq-ft space, and is expected to open in the summer of 2013.
Osteria Morini currently has two locations, in Soho and Bernardsville, New Jersey, and is described in Forest City's press release as a "mid-priced, casual restaurant with lunch and dinner menus featuring innovative pasta dishes, grilled meats, fish and regional specialties."
It is part of the Altamarea Group, which also includes Marea, Ai Fiori, Due Mari, Al Molo, and the soon-to-be-opened Nicoletta. Chef White is a James Beard nominee and was named best new chef by Esquire magazine in 2002. 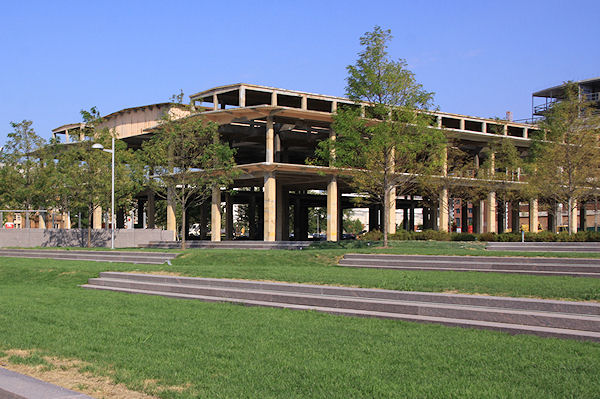 The Lumber Shed is one of the Yards Park's planned retail pavilions, which will also (temporarily) house Forest City's offices on the second floor. The restaurant will be located on the southeast corner of the building (seen at right), facing the Anacostia River and the Navy Yard, and will have outdoor seating on the east and south sides. With this announcement and Forest City's occupancy, the building is 60 percent leased, with the unleased space all on the ground floor for additional retail/restaurants.
This building is just to the south of the Foundry Lofts that opened in late 2011, and one block south of the Boilermaker Shop, where six restaurants will be opening over the next year or so. All three buildings are "adaptive reuse" projects of structures from the site's old days as part of the Navy Yard.
UPDATE: A bit of additional detail on the venture from Washingtonian's Best Bites blog. And here's the full press release.