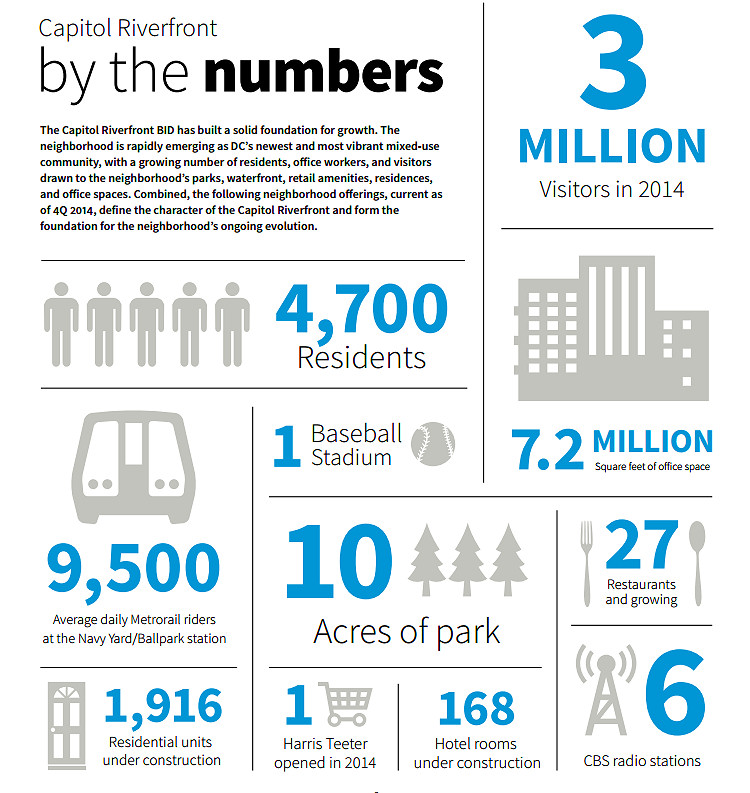 The Capitol Riverfront BID held its annual meeting on Thursday in the PNC Diamond Club at Nationals Park, where Max Scherzer was not in attendance, though Matt Williams stopped by and spoke for a few moments.
The main purpose of an annual meeting--beyond the networking and schmoozing--is the unveiling of the Annual Report, which is worth digging into for all sorts of numbers and graphs and summaries, though note that it hides no truly bombshell pieces of news for loyal JDLand readers (whew!).
That said, there were some items I haven't passed along before, one being that Forest City is planning to build a 190ish-unit apartment building alongside the PN Hoffman condo building coming to 4th and Tingey on the current Trapeze School site, with construction expected to begin on both late this year or early next. Forest City is also apparently planning to begin work this year on the marina and piers at Yards Park, and expected 2015 start dates were shown for Skanska's 99 M Street office building and Ruben's 909 Half Street residential building, alongside the already expected pending starts of Ballpark Square, Homewood Suites, and 82 I. 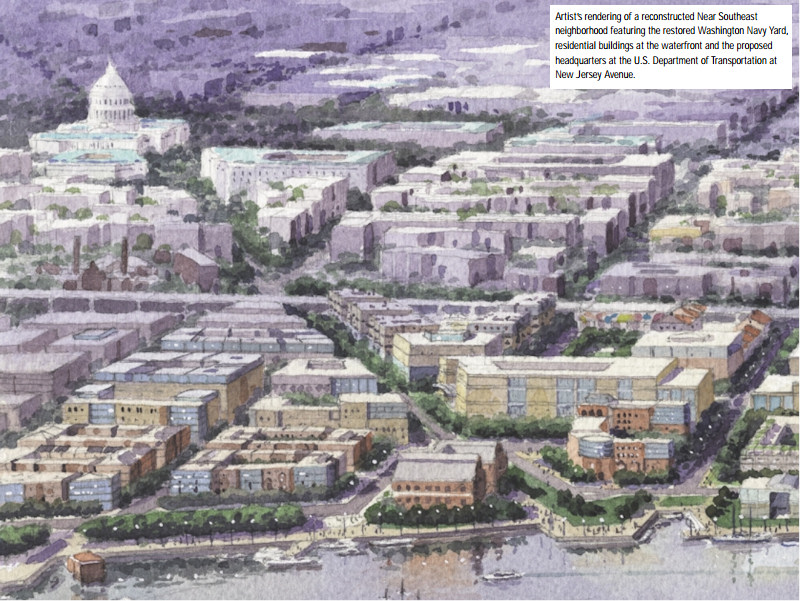 Also unveiled was a spiffy new promotional video for the neighborhood, which I encourage all residents to watch mainly to see if you are in it anywhere (UPDATED with the link).
The featured speaker was Andrew Altman, who helped spearhead the Anacostia Waterfront Initiative during the Williams administration, then became the first chief executive of the Anacostia Waterfront Corporation before moving on to jobs that including helping London plan for the future of its Olympic Park and other sites after the 2012 summer games. A quick characterization of one aspect of speech--which included visuals of a lot of watercolor renderings and photos that took me down memory lane--could be something along the lines of "Wow, all this stuff we planned is actually happening!" 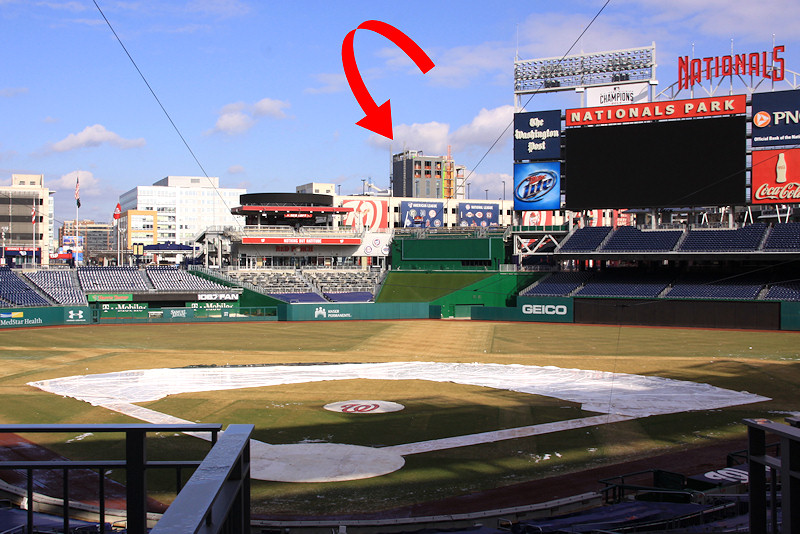 I took the opportunity of a visit to the ballpark to get a few photos, including one that may address the question many people have had: will any of the rooms at the new Hampton Inn have views of the playing field? I'm still not sure if the angle will allow unobstructed views of anything other than the center of the infield, but it is at least visual confirmation that the skyline outside the ballpark has changed for the first time in a few years.
In other news, fences went up this week in front of the Center Field Gate, leading some to hope that perhaps the planned move of the team store to its new home inside the stadium and the arrival of a restaurant in the N Street space might be moving forward. But apparently the work (which I captured sneakily from above) is to move the entrance gates a few feet closer to N Street.
I also had to get a shot I shall call Monument Valley in Winter, plus a decent view of the No Longer Spooky Parcel A at 1st and N. Forest City says that the parking lot planned for the near portion of the lot should arrive in late spring, with the sidewalks, grassy areas, and Trapeze School space coming later in 2015. 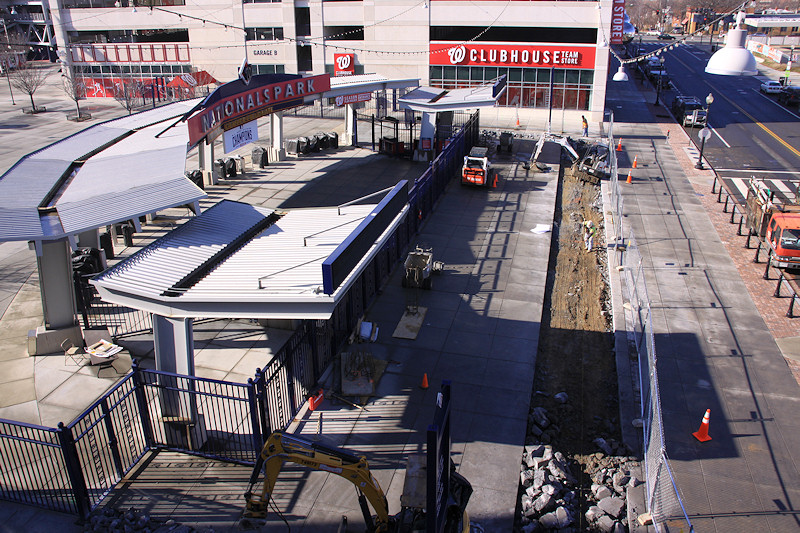 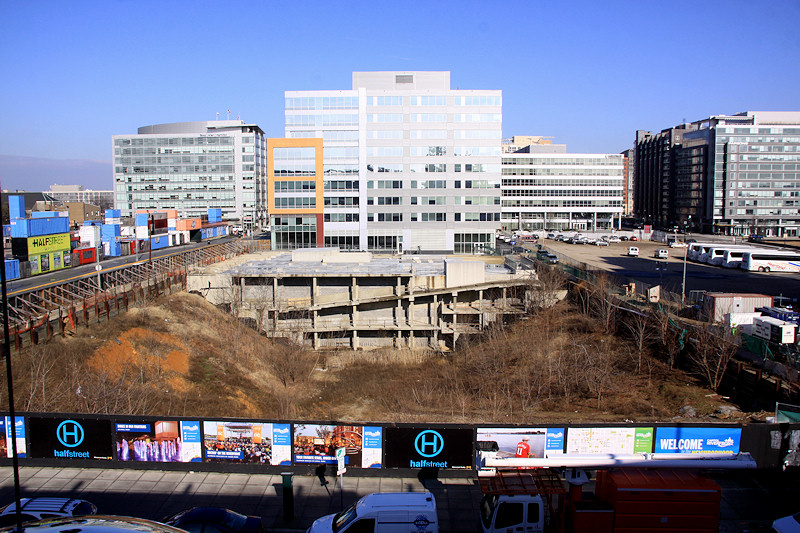 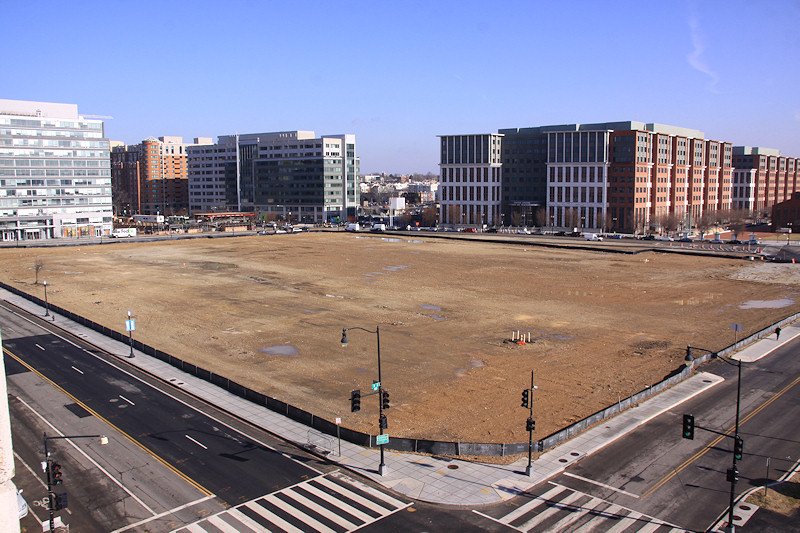