peek >> << back
Near Southeast DC Past News Items: willow
Advertise on JDLand 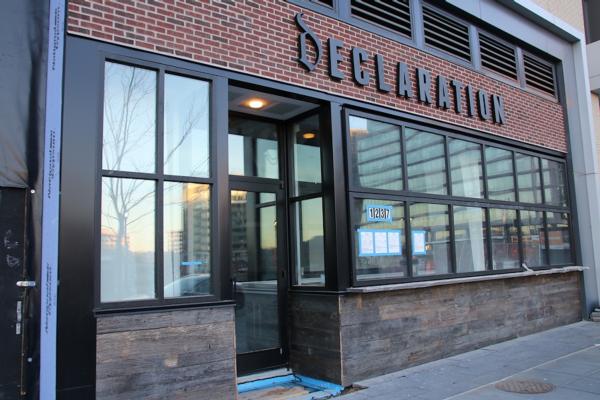 * DECLARATION DECLARING: A press release from Grosvenor says that Declaration will be opening at F1rst, in mid-March, as the building's first full-service dining option. "This new location will be double the size of its counterpart in [Shaw] and will offer pizza and Philadelphia-oriented menu items, including some ballpark staples." The release also says that Barre3 will open in spring late summer or fall [error in press release, I'm told]. With these openings, only one retail space at F1rst remains unleased.
* BARRACKS DECIDING: The Record of Decision and Final EIS for the new Bachelor Enlisted Quarters have been published, ending a study phase that feels like it began in 1936. The chosen site plan is to build the new BEQ immediately to the north of the barracks at 7th and L, SE (Building 25), which will spell doom for either some or all of the athletic field (it's been so long, I don't remember anymore). Read the MBEIS web site for actual details that aren't from memory.
* SOUTH CAPITOL PROJECTING: DDOT announced some temporary lane closures this week in multiple locations "for pre-construction work associated with the South Capitol Street Corridor Project and the new Frederick Douglass Memorial Bridge project." I believe this is the first mention of "pre-construction work" for these projects--or at least they are since the design-build contract was awarded.
* PEPCO DISRUPTING: ANC 6D07 Commissioner Fascett reports that PEPCO will be digging up portions M Street SE between 1st and 6th and 1st south of M to install underground pipes and then cables during February and March. Watch for daytime traffic disruptions weekdays and Saturdays.
* WILLOW VALENTINING: If you are in a red-heart mood on Saturday (Feb. 10), retail boutique Willow is having a Valentine's Day party, from 11 am to 7 pm. There will be valentine-making, cupcakes, a photo booth, and more. (Strangely, the valentines give out all look like this.) Willow is in the ground floor of Arris, on Water Street across from District Winery, just north of the Yards Park.
Nov 15, 2017 10:56 AM
Willow Opening on Friday, Nov. 17 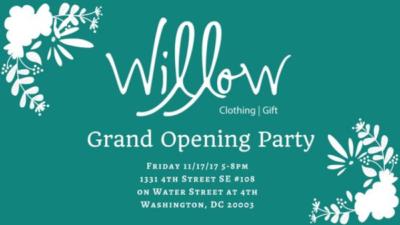 Interested parties are putting out the word that there's a Grand Opening party this Friday, Nov. 17, for Willow, the clothing and gift store that is opening its second location in the ground floor of the Arris apartment building at 4th and Water in the Yards.
Not only will there be treats and drinks and lots of stuff to buy, but "every guest will receive a complimentary Willow-designed Navy Yard shot glass."
The party will run from 5 to 8 pm.
Oct 6, 2017 8:30 AM
Friday Tidbits: Playoffs, Willow, Dockside, and More 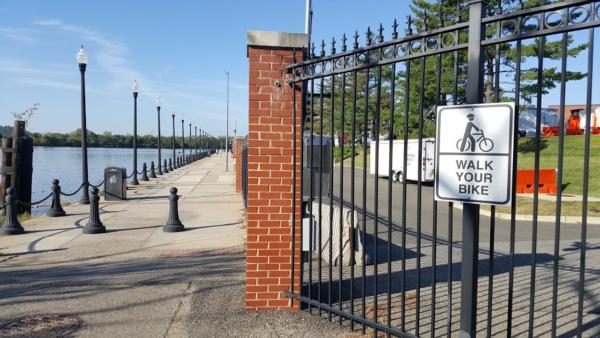 I start with this photo of some recently posted signage, which I'm pretty sure debuted at the top of the list of Most Ignored Signs in Washington. (No one ever believes me when I tell them that riding bikes isn't officially allowed on the Navy Yard portion of the Anacostia Riverwalk.)
And now to a way-too-long pile of tidbits:
* PLAYOFFS: I doubt anyone at this point needs to tell me that the first of what will hopefully be numerous playoff games this October at Nats Park is tonight (Friday), when Game 1 vs the Cubs starts at 7:31 pm. They'll play again tomorrow at 5:38pm, and would return on Thursday Oct. 12 for the fifth game of the series, if necessary. Here's a rundown from the BID of playoff-related festivities and deals that might be of interest.
* WILLOW: I have been remiss in not passing along that DC-based clothing and gift shop Willow is going to be opening a second location in the ground floor of Arris, at 4th and Tingey in the Yards. As described in the BID newsletter, "The store brand adds a distinctive local twist with DC neighborhood-inspired gifts and clothes designed in-house by members of the Willow team."
* DOCKSIDE?: I have not confirmed this personally, but a reader reports being told by workers putting out tables on Thursday that the new Yards Park boardwalk kiosk outlet of Osteria Morini is expected to open this evening. UPDATE: Reader now says that no, it's Due South Dockside. But that's what I get for not reporting it out myself. {hangs head in shame}
* BYE BYE 37 L: Photographic evidence on Twitter of the demolition of the Empire/DC Flyer Cab company building, which is making way for a new residential building. It becomes the 175th entry in my Demolished Buildings Gallery (up a spot from its brief designation as #174, after a reader pointed out that I had neglected to add, of all things, the McDonald's, though I will give myself a break on that one, given the maelstrom in my life at the time).
* THIRD STREET CLOSURE UPDATE: Flashing signage north of 3rd and Virginia says that the four-month-ish-southbound closure is now scheduled to begin Oct. 11. (After the first two games of the playoffs, I might add.) I saw from the freeway yesterday that the huge reinforcing beams (more like tubes) that were installed across the footprint of the two tunnels are being removed between 2nd and 3rd Streets, and there's even now some small square footage where both tunnels are covered with dirt. (UPDATE: The sign was changed this morning to read "On or About Oct. 10," and now the latest VAT newsletter says "as soon as Oct. 9.")
* GARRETT TEA LEAVES: The building permits have been approved, and construction trailers arrived within the past few days at the staging lot on the former trash transfer site at 2nd and K, and so signs are pointing to work getting underway on The Garrett, the last of WC Smith's "Collective" troika. Joining siblings Park Chelsea and not-yet-open-but-newly-landscaped Agora, the Garrett will have about 375 rental units, and ground-floor retail. (No, I don't know when Whole Foods is opening.)
* PARC RIVERSIDE PHASE II: A reader who lives at Velocity says that management informed residents that work is expected to resume Any Second Now (or maybe already has) on the excavation for what will be the second phase of the Parc Riverside residential project, at Half and K.
* BOWER FLOOR PLANS: If you have been desperately awaiting the condo project known as the Bower to start selling, well, that hasn't happened yet, but floor plans are finally available on their web site. (h/t RMP)