peek >> << back
Near Southeast DC Past News Items: dog
Advertise on JDLand 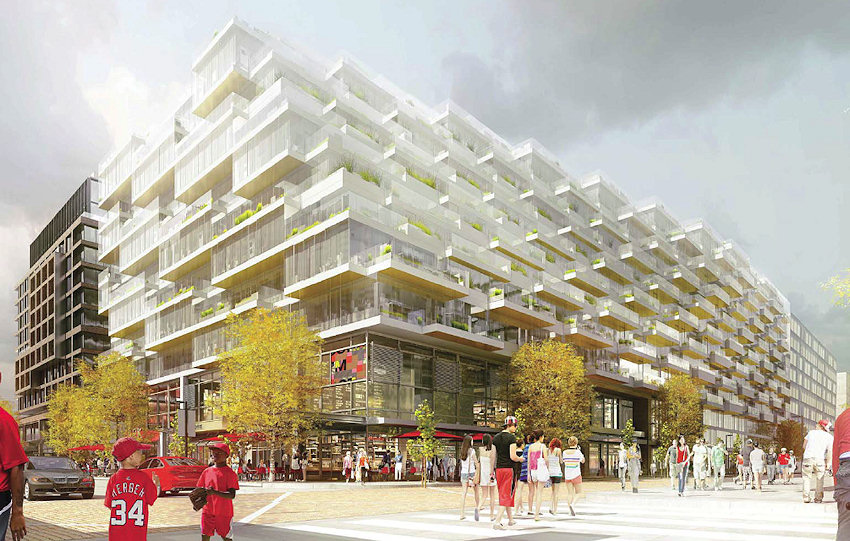 Some new-ish retail items, in order of likely levels of reader ecstasy:
* ATLAS BREW WORKS: Ivy City's brewery/tap room Atlas Brew Works announced last week that it is coming to JBG's West Half building next year, where it will occupy 4,500 square feet mere steps away from the Nats Park Center Field Gate. The new space, double the size of the Ivy City location, will also have a kitchen and a "limited food program" along side its brewery and 12-draft-line tap room. Atlas is the second announced retail offering at the non-box-like West Half building, along with the previously announced Commons Restaurant and its bakery/breakfast operation Mah-Ze-Dahr.
* DISTRICT DOGS: The neighborhood's second-largest population gets a new retail offering in the coming days, as District Dogs has announced it will officially open its second full-service pet care facility in the ground floor of 1221 Van on Saturday, March 9. In a custom-built space that faces South Capitol Street just north of N, DD will offer daycare (with four separate playrooms), boarding, grooming, walking, sitting, and a "boutique retail shop." There will be an open house on Friday, March 8 from 5 to 9 pm, and services can be booked starting on the 9th.
* EL BEBE: A reminder that Circa's tequila-and-taco sibling El Bebe is opening this Tuesday, Feb. 26, on the southwest corner of 1st and M in the ground floor of the 99 M office building. Here's the menu, should you wish to peruse in advance.
* SHILLING PROGRESS: A reader passed along on Twitter photographic evidence that the Shilling Canning Company seems to at last be inching closer to opening in the ground floor of Arris, on Water Street across from District Winery. The placeholder web site says "Opening Spring 2019," and the restaurant is now hiring.
* WELLS FARGO COMING DOWN THE STREET: If your heart was broken last summer when Wells Fargo closed its branch in the ground floor of 20 M, you can now perk back up, because it was announced last week that a Wells Fargo "Express Center" will be coming to the ground floor of the aforementioned 99 M office building. With this, 99 M's retail space is fully leased.
Sep 21, 2010 10:20 PM
CSX to Do Some Core Sampling in Virginia Ave. Park; First Public Meeting on Tunnel Project Coming Soon
It's not exactly the biggest news I've written about, but tonight ANC 6B voted unanimously to write a letter in support of CSX's request to the Department of Parks and Recreation to do some minor digging in Virginia Avenue Park as part of its NEPA requirements for the Virginia Avenue Tunnel expansion project. They'll be taking core samples, 1.5 inches in diameter, five feet in depth, about every 200 feet, looking for any archaelogically significant findings. (And, no, these samples won't be taken in the community garden.) If anything is found in the samples, CSX would then need to get new permits to do more extensive digging. There are also two other locations relatively close to the park where they'll take core samples, over by 11th Street.
Steven Flippin of CSX also told the commissioners that the first public meeting required by the NEPA process is tentatively scheduled for Oct. 20, at a time and place to be determined. This will be a "scoping" meeting, laying out the overall parameters of the project and the NEPA process. It will be followed, after a 30-day comment period, by an "alternatives" meeting. After another comment period, the final "overall" meeting about the tunnel project will be held, most likely in February of 2011.
I should also mention that commissioner Kirsten Oldenburg thanked CSX for paying for the new fence at Virginia Avenue Park that has now created the separate-enclosed-space-that-in-no-way-should-be-construed-as-being-an-official-dog-park.
Sep 8, 2010 9:58 AM
Virginia Avenue Park's Fenced-in Area Now Open
Numerous readers have passed along that fences are up and the new dog park fenced-in area appears to be close to opening has opened at the Virginia Avenue Park between 9th and 11th streets, SE, just south of the freeway (and just north of the Spay and Neuter Clinic at 10th and Potomac). I don't have a lot of information about the park, other than it's a project that was launched by the Hill's Capitol Canines group last year (supported by ANC 6B) and has been approved by the DC Parks and Recreation (you can see the application for more details). It's a 10,000-square-foot space, on the eastern side of the park.
If anyone involved in the park is out there and would like to pass along more information, please do, either to me directly or in the comments below. Because, if there's one thing I've found out in the past few years, it's that pretty much every single new resident of the Capitol Riverfront is the proud owner of at least one dog. (I just have a cat who thinks he's a dog.)
UPDATE: Did I say dog park? Why, no, it's not a dog park at all. Just a section of a park with fences put up, that certain residents and users may choose to utilize as a location for corraling four-legged beasts away from other uses in the rest of the park.
Sep 7, 2010 2:55 PM
Yards Park Ribbon Cutting Ceremony Photos 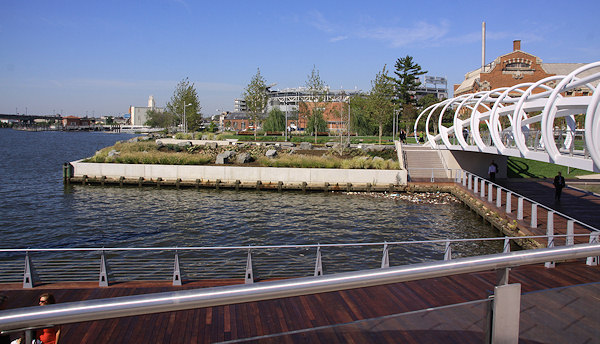 The weather gods smiled on the Southeast Waterfront today, with an absolutely picture-perfect day for inviting scads of dignitaries down to the Yards Park to make some speeches and cut a ribbon. Here's my quick photo gallery of the event, with photos not only of politicians wielding scissors but also plenty of shots of the park itself. I will soon update my Yards Park page with real before-and-afters, but that will take some time. 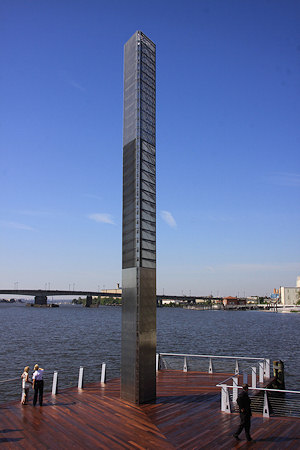 The 5.5-acre park, a $42 million partnership between the city, the feds (who owned the land until this morning), and the BID (which will be responsible for the upkeep and programming), is very simply like nothing else anywhere in DC. It not only has the pedestrian bridge and the light tower and the water features to gawk at, but it has so many different spaces for strolling, sitting, hanging out, playing, or just staring at the river, with its views all the way down to the Potomac River and further to Alexandria. There were many references during the remarks to Chicago's Millenium Park, and all involved with the creation of the Yards Park clearly see its potential as a "destination" attraction. The BID will be working hard to provide a lot of activities to draw people in, and down the road (if the reality ends up matching the vision), when the Lumber Shed becomes a retail-and-restaurant spot with river views, and the Foundry Lofts and Boilermaker Shops just to the north of the park open and become attractions in their own right, this could be quite a jewel in the city's crown.
Add to that the eventual building of a floating boardwalk that will connect the Yards Park to Diamond Teague Park by the baseball stadium, making it an easy stroll along the river to go back and forth between the two venues, and you can start to imagine the fans streaming out of the ballpark on Friday nights to watch the post-game fireworks firing off above the Anacostia River from the Great Lawn or the boardwalk. (I'm told that the boardwalk is in the design stages, though there's no timeline for when it might be built.)
As for the area east of the park, I'm hearing that there is "progress" in working with the Navy Yard to open its boardwalk (that leads to the Display Ship Barry and 11th Street), but again, no timeline on that.
There was a lot of media present today (especially since both Mayor Fenty and Vince Gray were in attendance), so I'll update this post with whatever stories appear. UPDATE: Here's the press release from the mayor's office. Also there's ABC7's report, which also is about today's other Anacostia River event, where council members (but not Mayor Fenty) showed up to sign a pledge to work with the Environmental Protection Agency to clean up six designated toxic sites along the Anacostia, which include in Near Southeast the Navy Yard, the Yards/Southeast Federal Center, the Washington Gas site east of 11th (more on that from Fox 5, including that the Anacostia Riverkeeper and Anacostia Watershed Society groups are concerned that monies from the city's tax on plastic bags are so far not being directed toward cleaning up the river).
Also, it sounds like the fences at the park will be closed again for the next few days while they get some finishing touches done (the eastern end of the park is still being worked on), but it will then have its Grand Opening Weekend starting Friday at 3:30 pm. And then I can get some nighttime photos, because apparently the park's lighting is something to be seen.
(I've also gotten--and forwarded along--some e-mails from residents grousing about what they see as the less-than-adequate size of the dog park on the park's western edge; I've asked Forest City for more information about the current and future plans for the dog park, and will post about it when I hear back.) 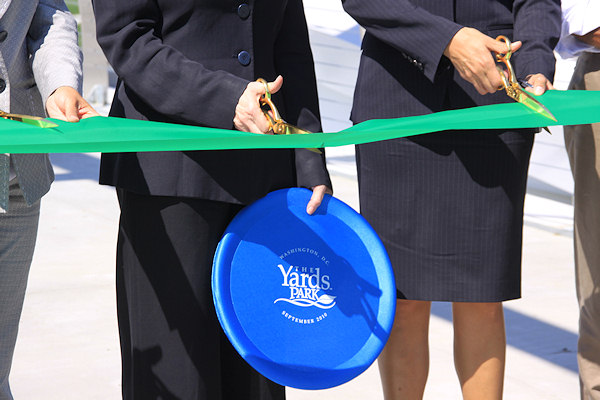 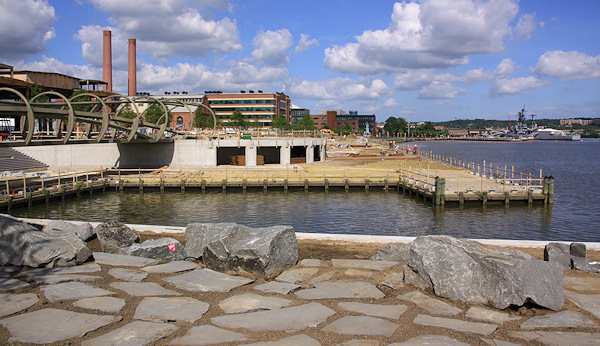 It was a beautiful afternoon for a walk along the Anacostia River, and I was lucky enough to take my stroll within the boundaries of the forthcoming Park at the Yards. The 5.8-acre park is scheduled for a "late summer" opening, and it's definitely taking shape, as you can see in my new Park Construction Photo Gallery. (And thanks also to Mother Nature for the fab backdrop; compare the shots from my visit in March to see why I tend to avoid cloudy days if at all possible.) The park, for those not keeping up, is being built by Forest City as part of The Yards, but is being funded by the city through PILOT monies and then will be turned over to the Capitol Riverfront BID for maintenance and "programming" once it's completed. It's that public money that has allowed the park's construction to go forward during a time when private funding is pretty hard to come by.

The biggest news is that the 60-foot light tower on the water's edge at the foot of Third Street, which was originally not going to be installed until the park's second phase, is now going to arrive (by barge!) in July and be in place when the park is unveiled.
And, while the no-longer-salmon-tin-sided Lumber Storage Shed will be merely an open skeleton when the park opens, it sounds like maybe the possibilities of tenants are close enough that the Shed could be transformed into its glass-skinned retail pavilion new self sooner than might have been anticipated during the park's design phase.
(There also seems to be similar optimism about both the nearby Foundry Lofts and Boilermaker Shops projects getting on track. Forest City continues to work with HUD to get the financing squared away for the Lofts, and the Boilermaker Shops could get underway before the end of the year.)
Also in evidence in the Photo Gallery is the (ZOMG!!) dog park. which will be a fenced-in area on the far western edge of the park along the boundary with the 1905 WASA building.
So, wander through and read the captions for greater detail, and compare the photos to the park rendering at the top of the page to orient yourself and to understand what different sections will look like when completed. 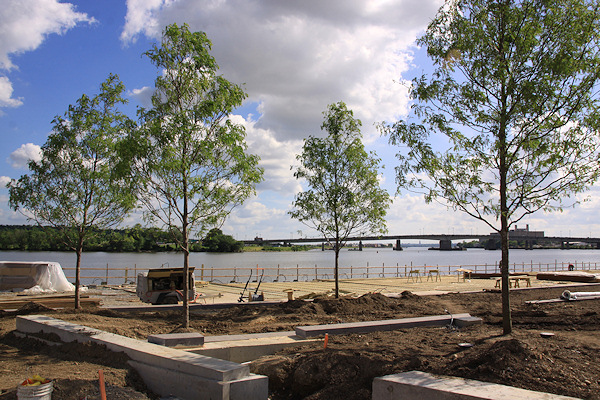